The Injector Oil all others are based and compared from

I’ve been Interceptor for a few years now and I have had zero engine problems and clean spark plugs every time I’ve pulled them. OEM oils are nearly double the cost of this product. I buy the gallons to fill the sleds at home and I keep a quart in each machine just in case.

Even with an OEM recall on internal engine parts Interceptor protected beyond expectations. Read the 3,469-Mile Case Study in Rotax E-TEC Engine 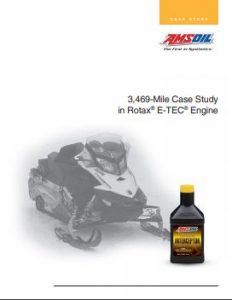 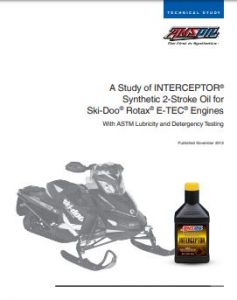 During the Pro Open final at the opening rounds of AMSOIL Championship Snocross, professional rider Lincoln Lemieux’s Ski-Doo lost all its engine coolant after a hose clamp broke. Despite intense heat that melted the exhaust power valve covers, O-rings and gaskets, AMSOIL DOMINATOR Synthetic 2-Stroke Racing Oil protected Lemieux’s engine so well, the team is able to reuse the engine after replacing the melted parts.

Find Products for your Sled

Two-stroke snowmobiles are meant to be ridden hard. Repeatedly pushing a machine to wide-open throttle during all-day, aggressive riding, however, takes its toll on the engine. INTERCEPTOR Synthetic 2-Stroke Oil is specifically designed for maximum performance in all makes of two-stroke snowmobiles, including Ski-Doo*, Polaris* and Arctic Cat*, helping enthusiasts spend more time riding and less performing maintenance. It is compatible with nearly all other two-stroke oils, while its low-smoke, low-odor properties help ensure riders won’t be “smoked out.” INTERCEPTOR is engineered to be pushed as hard as the sleds it protects.

During the winter of 2015/16, INTERCEPTOR was tested in the three top makes of snowmobiles. Each sled was added to the rental fleet of a different outfitter in the Eagle River, Wis., area and placed into service. Following the season, the sleds were disassembled and examined for wear. Results reveal INTERCEPTOR prevented piston ring sticking and piston scuffing, (see below) while the exhaust power valves contained no abnormal deposit buildup and did not stick.

AMSOIL INTERCEPTOR Synthetic 2-Stroke Oil is engineered for use in direct-fuel-injected (DFI), electronic-fuel-injected (EFI) and carbureted two-stroke snowmobiles, including those made by Polaris*, BRP*/Ski-Doo* (Rotax* E-TEC* engines), Arctic Cat* (C-TEC 2) and Yamaha*.

Use AMSOIL INTERCEPTOR Synthetic 2-Stroke Oil in all direct-fuel-injected (DFI), electronic-fuel-injected (EFI) and carbureted two-stroke snowmobiles, including those listed below and two-stroke motorcycles, ATVs, PWCs and where API TC oils are specified.

Use as injection oil or 50:1 premix (2.6 oz. per U.S. gallon of gas). INTERCEPTOR is compatible with most conventional and synthetic two-cycle oils; however, for best performance, mixing oils should be minimized.

AMSOIL INTERCEPTOR Synthetic 2-Cycle Oil is recommended as an injector oil or at a 50:1 mix ratio in carbureted, electronic fuel Injected (EFI) and direct fuel injected (DFI) snowmobiles, personal watercraft, motorcycles, ATVs and jet boats, including, but not limited to, those manufactured by Bombardier®, Sea Doo, Ski Doo, Yamaha®, Arctic Cat®, Polaris®, Kawasaki®, Suzuki® and Honda®.It is recommended wherever API TC and JASO FC two-cycle oils are specified. INTERCEPTOR is compatible with and recommended as a replacement for all mineral and synthetic manufacturer branded two-cycle oils. For top performance, mixing is not recommended. Best choice for Sea Doo, Ski Doo, Wave runner, and Rotax engines.

Use where API TC oils are specified. Use as injection oil or 50:1 premix (2.6 oz. per U.S. gallon of gas). INTERCEPTOR is compatible with most conventional and synthetic two-stroke oils; however, for best performance, mixing oils should be minimized. 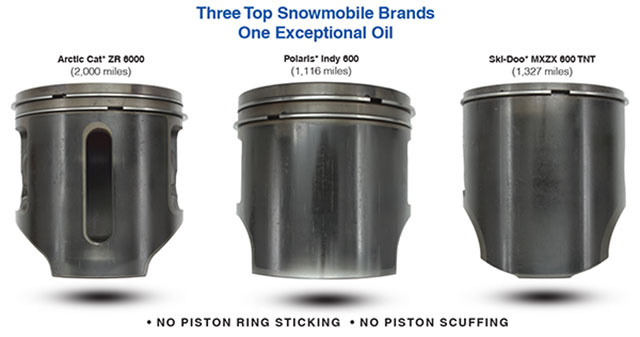 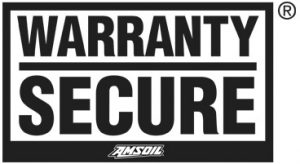 Be advised – Ski-Doo snowmobile dealerships caught lying to customers and breaking federal law at the same time. From time to time some original equipment manufacturers have been caught advising customers that the use of oils other than the OEM branded oil will void customers warranties. Of course this is not true as dictated by the Magnuson-Moss Warranty Act which states, in essence that any oil conventional or synthetic which meets correct viscosity grade and service requirements can be used in the application in question. the only circumstance under which a manufacturer can require the exclusive use of a particular oil is if that manufacturer provides the OIL FREE OF CHARGE! (or if the application is not intended for consumers).
Actual scare tactics were used in the owners manuals but it was quickly taken to their attention by AMSOIL INC. The language in the Ski-Doo owners’ manual stated that the “Use of other
2-stroke engine oils may cause severe engine damage and may void the limited warranty.” It went on to say that there was “no known equivalent” to the branded Ski-Doo lubricant on the market. Needless to say this is all total nonsense. AMSOIL wasted no time in setting the record straight.
AMSOIL Attorneys advised the staff at BRP – Bombardier Recreational Products Inc. that their warranty language “violates both federal and state laws regarding warranties and deceptive/unfair practices.” The chaps at BRP agreed to modify the language in its snowmobile owners’ manual.

Here’s the letter sent to BRB:
Recently, AMSOIL customers notified us that when they purchased a Ski-Doo snowmobile, the snowmobile dealer advised that it was necessary to use Ski-Doo branded lubricants – or risk the loss of warranty coverage. Dealers were likely relying on language in the Ski-Do operators’ manual that said to “use only” a specified Ski-Doo synthetic lubricant and stated: “Use of other 2-stroke engine oils may cause severe engine damage and may void the limited
warranty.” Other language in some Ski-Doo operators’ manuals said that there was “no known equivalent” to the branded Ski-Doo lubricant on the market.
AMSOIL confronted Bombardier Recreational Products, the manufacturer of Ski-Doo snowmobiles, about the warranty language in its operators’ guides. Specifically, AMSOIL asserted that the warranty language violated the Magnuson-Moss Warranty Act, a federal
law which prohibits manufacturers from requiring the use of a branded service/replacement part, unless the branded service/replacement part is provided free of charge. AMSOIL pointed out that its line of synthetic lubricants meets or exceeds the engine performance requirements for both 2- and 4-cycle engines used in power sports equipment.

Bombardier Recreational Products, while denying that its warranty language violated the Magnuson-Moss Warranty Act or any other regulation, has advised AMSOIL that it has never denied a warranty claim based on use of an “improper oil.” Further, Bombardier advised that it will modify the language of its snowmobile operators’ guides as follows:
1. It will no longer say that use of oil other than the Ski-Doo branded product may void the warranty.
2. When it recommends a particular branded product, it will ensure that the language is clearly identified as a recommendation rather than a requirement.
3. It will no longer comment on the availability of equivalents to the Ski-Doo brand oil(s).

AMSOIL is publishing this notice to inform the public of this significant change in Ski-Doo’s warranty policy and to assure its customers the AMSOIL line of synthetic lubricants meets or exceeds the performance requirements of their snowmobile engines and to insure that snowmobile owners do not mistakenly believe that use of AMSOIL lubricants will place their warranties at risk.

Although BRP did not come right out and admit they were in violation, they obviously conceded the issue and I appreciate the initiative they are taking to change their oil recommendation language.
We can expect that issues like this will continue to surface, and our Dealers and Preferred Customers can be assured that the company will remain diligent in its effort to keep the playing field level. Purchasing decisions should be made on product quality, and any effort, whether intentional or not, to drive those decisions by any other means is simply unacceptable. At AMSOIL, we let our products do our talking.

Keep in mind that although the interceptor meets API TC, this specification is outdated and becoming obsolete. The primary and more recent specification to look for is JASO FA, FB and FC standards which apply to air-cooled motors found in transportation, hand held power equipment and other small air cooled motors. These standards address improved cleanliness, decreased smoke, emissions and lubricity .AMSOIL goes a step further with Interceptor. This product is designed to combat the problems associated with power valves and expensive OEM 2-cycle lubricants. The AMSOIL Interceptor oil (AIT) if formulated from premium-quality synthetic oils and a potent additive package, Interceptor provides the ultimate in clean engine operation. This two-stroke formula effectively prevents plug fouling and significantly reduces wear on cylinders, pistons and bearings while also minimizing smoke and odor.

Exhaust Power Valves are devices installed in the exhaust port that increase or decrease the size of the exhaust port during the operation of the motor. This system increases the efficiency of the motor and expands its power band. The motor produces more power, uses less fuel and produces fewer emissions. Personal watercraft, motorcycles and snowmobiles commonly use these types of engines. In the past, these valves required routine maintenance. Carbon and soot build-up on the valves caused them to stick. If the valve sticks, the motor looses power. The ash type chemistry used in AMSOIL Interceptor 2-cycle injection oils are very potent and limit the carbon deposit formation. Proper amounts of ash are critical and provide excellent results.