P.i. improves fuel mileage an average of 2.3% and up to 5.7%. Reduces emissions such as hydrocarbons (HC) up to 15%, carbon monoxide (CO) up to 26% and nitrous oxides (NOx) up to 17%. Restores power and performance. Reduces the need for costly higher octane fuel. (API)

New formulation treats up to 30 gallons now instead of 20!

The #1 Best Selling non-oil product for AMSOIL! And most of that is repeat sales. When I first used the current version I achieved a stunning 50 more miles from a tank of gas. This product restores lost performance which typically a professional injector cleaning procedure is used which costs 10X what this costs. Just use this every 5000 miles.

A vehicle demonstrates its best efficiency and engine performance when it is new. As the engine ages, its performance suffers from gasoline fuel-generated deposits that form on the fuel injectors, intake valves and combustion chamber. Additives are required to control deposit formation.

AMSOIL P.i. features aggressive additives that attack the most common forms of engine deposits and limit their effects.

P.i. removes stubborn deposits and keeps injectors functioning as they should. Testing shows P.i. restored GDI fuel injectors to a 100 percent flow rate after one tank of fuel.2

Valve deposits alter or restrict airflow patterns in the cylinder. They disrupt the balanced air/fuel ratio by momentarily absorbing and releasing fuel. The deposits can also cause valve sticking by getting in the way of the valve stem and guide.

AMSOIL P.i. works as an ?emissions passer.? It is ideal for use prior to emissions inspections.

Combustion chamber deposits increase compression and absorb heat during combustion. Later, they release that heat during the intake cycle. In some engines deposits can cause the piston to actually hit the cylinder head – a process known as “carbon rap.” The deposits can also flake off and become trapped between the valves and valve seat, resulting in compression loss.

Higher compression and stored heat increase the likelihood of pre-ignition “knock” when the fuel spontaneously combusts prior to spark ignition. This increases emissions and may cause engine damage. Most vehicles have sensors that adjust spark timing to prevent knock. Although audible ‘knock’ is controlled, power is lost from retarded timing and engine efficiency suffers. Higher octane fuels can be used to help prevent the phenomenon. As a vehicle ages, more-expensive, higher-octane fuel is needed to keep it operating at peak performance. 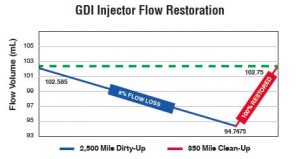 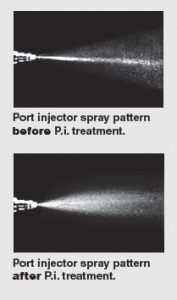 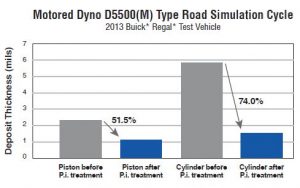 AMSOIL P.i. maximizes fuel efficiency by dissolving and removing deposits and other contaminants for improved power and overall performance. It improves fuel mileage up to 5.7 percent.1

P.i. works as an “emissions passer.” Running one tank of treated fuel through your engine helps pass emissions tests.

Many new vehicles have replaced traditional fuel caps with capless systems. The threads on most bottles restrict them from opening the flap inside the fuel neck and also make removing the bottle difficult. The P.i. bottle is fully compatible with capless fuel systems.

Fuel standards don’t require gasoline distributors to add more the 1980 standard amount of injector cleaner to fuel. While many brands do indeed add a significant amount to show impressive results (when you are lucky) they still don’t add enough to clean valves. Henceforth, injector and air flow performance degrades adding a potential loss of 2 to 8% in economy within just 4000 miles.

AMSOIL P.I. (product code API) will restore your intake system to like new condition. As few as 4000 miles all it takes to have clogged injectors or significant carbon build-up on your intake valves. Please continue reading and see the presentation link below: 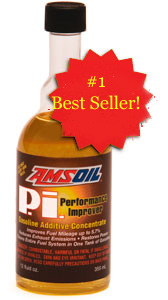 In addition to the savings in fuel AMSOIL’s synthetic motor and drivetrain lubricants have become legendary for, AMSOIL’s P.I. Performance Improver Gasoline Additive adds even more economy for less!

Ideal for both fuel injected and carbureted systems. Dissolves and removes fuel system deposits and other contaminants for improved power, overall performance and fuel efficiency in gasoline engines.

Available in the following sizes:

Untreated Fuel Leads to Poor Engine Performance
A vehicle demonstrates its best efficiency and engine performance when it is new. As the engine ages, its performance suffers from gasoline fuel-generated deposits that form on the fuel injectors, intake valves and combustion chamber. Additives are required to control deposit formation.

AMSOIL PI works as an “emissions passer.” It is ideal for use prior to emissions inspections.

Unsurpassed Deposit Clean-up
Port Fuel Injector Deposits form after the engine has been shut down and there is no gasoline flowing through the injectors. During this “hot soak” period the injectors heat up and the gasoline remaining in the injectors degrades and forms deposits. This can happen very quickly with the use of poor quality gasoline and short trip driving. Because the clearances within the injectors are extremely tight and injectors must deliver precise amounts of “atomized” fuel, even small amounts of deposits can cause injectors to malfunction. Fuel flow is reduced and spray patterns are disrupted, decreasing engine efficiency, power and fuel economy, while increasing exhaust emissions.

Intake Valve Deposits form on the intake side or back side of the valves. As deposits increase, they restrict airflow and alter airflow patterns in the cylinder. The deposits disrupt the balanced air/fuel ratio by momentarily absorbing and releasing fuel, and they can cause valve sticking by getting in the way of the valve stem and guide. Deposits also restrict proper seating, and the valves may be burned. Intake valve deposits cause lost engine power, increased emissions, poor engine efficiency and potential valve failure. 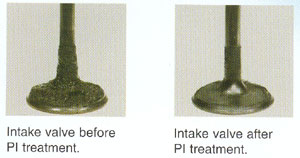 Higher compression and stored heat cause increased intake fresh charge temperatures and the increased likelihood of pre-ignition “knock” or “pinging” when the fuel spontaneously combusts prior to spark ignition. This increases emissions and may cause engine damage. Many of today’s cars have “knock” sensors that adjust spark timing to prevent knock. 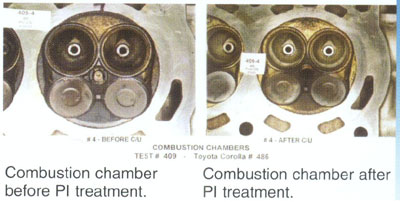 Recommendations
Treat one full tank of gas every 4,000 miles or 100 hours of service. One bottle treats 20 gallons of gas. Do not treat and run more than 40 gallons of gas per treatment. PI helps pass emissions tests. Treat gas, run that tank and fill up again prior to test. Safe for use with catalytic converters, oxygen sensors, oxygenated gas and 10% ethanol blended gas. Not recommended for two cycle engines.

DANGER: Combustible. Harmful or fatal if swallowed. Harmful if inhaled. Skin and eye irritant. Read precautions on container before use.

AMSOIL Dealer Dorsett Wilson is amazed AMSOIL still has surprises to offer in product performance.
He discovered one of them in the recently reformulated AMSOIL Performance Improver (API) when he traveled from Houston, Texas to AMSOIL University in Superior, Wis. this spring.
“AU was a blast as always,” Wilson said. “Just when you think ‘surely they haven’t come up with anything startlingly new,’ they do. The new PI is one of those things.”
Wilson reports averaging around 21 miles per gallon on the trip from his home in Texas to Duluth, Minn. in his 2000 Ford Ranger.“
I was not completely convinced that the new PI was as good as people were saying at AU, so I decided to check it out,” he said.
Wilson put a bottle of PI in the tank when he refueled for his trip home. Then, he tallied the mileage at each of three gas tank fills on the way back to Houston.“
On the way home, the first tank refueling took 18 gallons and was 22.1 mpg, the second refueling took 19.3 gallons at 22.9 mpg and the last refueling was with 18.5 gallons at 24.01 mpg,” he said. “The best fuel mileage I had ever received before was 23.7 mpg at around 15,000 miles on the odometer.”
The drive home showed Wilson the reformulated PI lived up to what he had heard.“When I arrived in Houston, I was convinced that the PI is an excellent product,” Wilson said.

Our own local automotive writer Ed Wallace has recently written a great article on the problems of Ethanol we though you should see. Mr. Wallace has been writing about ethanol and other fuel blends for over 13 years.

“one final setup for the public has gone unnoticed. At the Web site, www.fueleconomy.gov, which confirms the 25% to 30% drop in mileage resulting from the use of this blended fuel, another feature lets users calculate and compare annual fuel costs using regular gasoline to costs using E85.” – Ed Wallace