Series 3000 Diesel Oil is heavily fortified with detergent/dispersant additives and is naturally resistant to soot. It is designed to keep soot particles suspended independently and prevent them from attaching together to form larger, wear-causing particles. Viscosity increase is minimized and soot-related wear is controlled.

Series 3000 5W-30 Synthetic Heavy Duty Diesel Oil is recommended for diesel engines, including those that are turbocharged, gasoline engines and other applications that require any of the following specifications:

AMSOIL Series 3000 5W-30 Synthetic Heavy Duty Diesel Oil is compatible with other conventional and synthetic motor oils. Mixing AMSOIL motor oils with other oils, however, will shorten the oil’s life expectancy and reduce the performance benefits. AMSOIL does not support extended drain intervals where oils have been mixed.

Aftermarket oil additives are not recommended for use with AMSOIL motor oils.

*Operating conditions and drain intervals for severe and normal service are defined by the OEM. Refer to your owner’s manual.

This product is not expected to cause health concerns when used for the intended application and according to the recommendations in the Material Safety Data Sheet (MSDS). An MSDS is available via the Internet at www.amsoil.com or upon request at (715) 392-7101. Keep Out of Reach of Children. Don’t pollute. Return used oil to collection centers.

Be sure to read and pass along this report from Lubes & Greases which is regarding the latest on the 3000 mile myth. Government figures are now speaking out on the problems involved with the long time “change your oil to be safe 3000 miles) which was old news in 1972 when AMSOIL entered the market.

Direct Jobbers John and Leah Kahrs of Hudson, Iowa know the savings potential of AMSOIL products; they also know that in these tough economic times, school districts need to save money as much as anyone.

Kahrs set his sights on making a customer of the Hudson Community School system back in 2006. There were a couple superintendent changes, but eventually Kahrs got an appointment and gave a third presentation to new superintendent Roark Horn. Kahrs made the presentation on the benefits and cost savings potential of AMSOIL. Horn was intrigued and agreed to register as a commercial account. 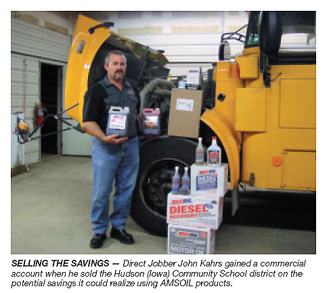 Kahrs first performed an oil analysis on all the buses to ensure they were mechanically sound and to get a baseline on the performance of the conventional oils they had been using.

Before making the switch to AMSOIL, the school had a local school bus service shop perform oil changes based on recommended 3,000 to 4,000 mile intervals. The buses hold between 18 and 20 quarts of oil each. Combined, they are driven 64,000 miles annually, which equated to 16 conventional oil changes.

Since the conversion in 2008, only one bus has had the oil changed based on oil analysis results. This bus is running a C7 Caterpillar and the oil was changed after 20 months of service, 18,961 miles and 871 hours of engine operation.

“While the mileage may not seem significant, the results were pleasing,” Kahrs said. “These buses are severe service, driving mainly rural gravel roads that are soft, muddy and dusty.”

The other buses in the fleet still are running on the first AMSOIL oil change. Oil filter changes and oil analysis are performed annually or based on hours.
The school was spending $1,034 a year on conventional oil and filter changes, not including the costs of oil change labor or the driver’s time to take the buses in for oil changes.

“The AMSOIL conversion was a one-time cost of $1,238 and does not include oil change labor,” Kahrs said. “No driver time is required as oil changes were performed at the school bus shop after hours. This is a $1,034 annual savings in oil and filters alone. The savings to the environment is 80 gallons of used motor oil and 16 used oil filters.”

The district’s three vans, automobile and pickup also use AMSOIL products. “AMSOIL allows the vehicles to run through the school year without needing an oil change,” Kahrs said.

The buses and vehicles all use AMSOIL fuel treatments. AMSOIL diesel fuel treatments keep the buses running even in the cold of winter in northeast Iowa.

“Two years ago when neighboring school districts could not get their buses started in the 34-degrees below zero weather, Hudson’s buses all started and ran their routes,” Kahrs said. “All during the cold winter, no fuel-related or starting issues were experienced. “AMSOIL can save commercial accounts time and money and add value and productivity to their bottom line. No matter how big or small your commercial fleet is, AMSOIL will provide you with the performance and savings you need.”

Diesel engine emissions have been an ongoing environmental concern for the past few decades, and the United States, Europe and Japan have responded to demands to reduce harmful particulates and nitrogen oxides (NOx). In the U.S., particulate and NOx levels were first regulated in 1988, with regulations becoming increasingly stringent through the years. In fact, 1988 standards set NOx and particulate levels at 14.4 g/kWhr (grams/kilowatts – hour) and 0.8 g/kW-hr respectively, while 2010 standards have been set at 0.27 g/kW-hr and 0.013 g/kW-hr respectively. By 2010, diesel engines will be considered “clean,” but getting there will require sulfur-free fuel, improved in-cylinder combustion, exhaust after-treatment, vehicle design changes and diesel oils that are compatible with after-treatment systems.

The API CI-4 diesel oil specification was introduced in December 2001 to protect against the higher temperatures and increased levels of acids, soot and oxidation associated with EGR engines, while some manufacturers released their own diesel oil performance specifications in order to assure optimum protection for their equipment. Mack released its stringent EO-N Premium Plus High Performance Diesel Engine Oil specification in the spring of 2002, then upgraded it to EO-N Premium Plus 03 in April 2003 due to soot-related oil thickening and shear that occurred after a certain length of highway time.

API issued an upgrade to its CI-4 specification, CI-4 PLUS, in September 2004 in order to provide improved oxidation resistance, shear stability, acid neutralization and soot dispersancy for EGR engines. CI-4 PLUS certified diesel oils also meet most of the individual manufacturer issued specifications and are backward compatible with older diesel oil specifications and engines. CI-4 PLUS oils must first meet the original requirements of CI-4, with the additional requirements of passing the 90-Pass Shear Stability Bench Test and the Mack T-11 engine test, a more stringent upgrade of the Mack T-8E soot-viscosity test required for CI-4.

In order to meet 2007 particulate standards, exhaust after-treatment devices such as particulate filters (DPF’s) and continuously regenerative traps (CRT’s) will be incorporated into diesel engines, creating new challenges for diesel oils. AMSOIL Synthetic Diesel Oils are ahead of the curve and ready to meet the challenges of tomorrow.

Copyright © 2000-2011 The Synthetic Warehouse. All rights reserved. All materials contained on this site are protected by International copyright law and may not be reproduced, musterd, distributed, transmitted, displayed, published or broadcast without the prior written permission of The Synthetic Warehouse or AMSOIL INC. We do check often and take action to those using our unique material.

However, you may download material from our web site for your personal, noncommercial use only.
AMSOIL INC. ISO 9001:2008 Certified