Constantly improved – making AMSOIL’s Severe Gear the most advanced product we sell. This product is ultra popular because it works! See your temperatures drop drastically – Ends metal to metal contact.

For product service life in differentials, consult your owner’s manual or the Original Equipment Manufacturer (OEM) to establish the application, NORMAL or SEVERE.

For product service life in non-differential applications, consult owner’s manual or the OEM for either normal or severe synthetic oil service intervals. Where service intervals are unavailable, drain at twice the interval for conventional oil.

Gear oils should be changed more frequently when operating vehicles or equipment in dusty or dirty conditions, unless the gear system is properly sealed and equipped with membrane-type breathers.

Recommended for use in differentials, manual transmissions and other gear applications requiring any of the following specifications: API GL-5, MT-1, MIL-PRF-2105E, Dana SHAES 234 (Formerly Eaton PS-037), Mack GO-J, or the differential (hypoid) gear oil specifications from all domestic and foreign manufacturers such as GM, Ford and Daimler Chrysler. Can also be used in axles where an API GL-4 lubricant is recommended.

AMSOIL Severe Gear is compatible with conventional and synthetic gear oils. Mixing AMSOIL gear oil with other oils, however, will shorten the oil life expectancy and reduce the performance benefits. AMSOIL does not support extended drain intervals where oils have been mixed.

Aftermarket oil additives, other than those specified by AMSOIL, are not recommended for use with AMSOIL gear oil.

This product is not expected to cause health concerns when used for the intended application and according to the recommendations in the Material Safety Data Sheet (MSDS). An MSDS is available via the Internet at www.amsoil.com or upon request at (715) 392-7101. Keep Out of Reach of Children. Don’t pollute.

If you feel you don’t fall into the severe gear category such as you are not hauling heavy loads, your differential is not subjected to heavy abuse to include a lack of cooling as SUV’s experience. Try our “Long Life” 75W90. This was designed for over the road trucking which use larger sumps operating significantly cooler and the fluid is needed to hold it’s EP qualities for longer time.

AMSOIL is continually researching methods to enhance its already-superior product line. New additive technology has recently been incorporated into the Severe Gear® Synthetic EP Gear Lube line, providing even greater protection and performance. While users may notice the fluid color has changed slightly, the previous and new formulations are compatible and may be mixed.
Pricing remains unchanged, providing even greater value.

In 2007, AMSOIL subjected Severe Gear 75W-90 Synthetic Gear Lube and
a number of competing gear lubes to a comprehensive series of industry-standard tests. While some lubes performed well in some areas and poorly in others, Severe Gear placed near the top in all performance categories. It revealed itself to be the most well-balanced formula for its time, capable of providing exceptional performance and protection in a range of applications.

Since then, AMSOIL gear lube technology has advanced, making an already superior product stronger. As the results show, the new additive technology allows Severe Gear to outperform the previous formulation and all of its competitors as tested in 2007. AMSOIL has raised the bar for gear lube performance even higher.

High-horsepower/high-torque applications demand lubricants with increased extreme-pressure (EP) properties. The Falex Extreme-Pressure Test (ASTM D-3233) is used to determine a lube’s ability to provide EP protection. As Chart 1 shows, although the previous formulation ranked in the top tier, the new technology provides an 80 percent increase in EP protection and easily outperforms all competing formulations from A Study of Automotive Gear Oils. 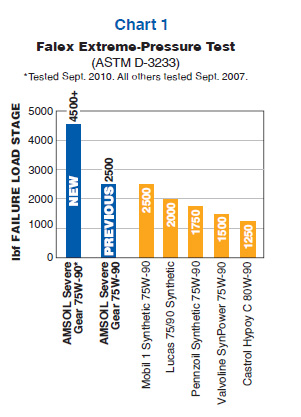 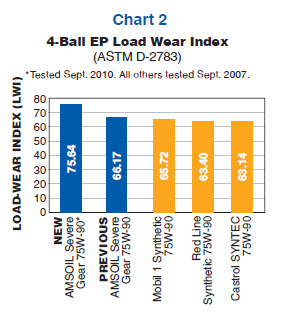 Use AMSOIL Severe Gear for ultimate performance and protection.

A test on four separate vehicles further demonstrated the importance of changing the factory-fill gear lube within the first few thousand miles. Oil analysis results revealed most of the wear in vehicle one occurred within the first 6,869 miles. Despite higher mileages, vehicles two and three only showed slightly higher iron wear than vehicle one. Vehicle four was the only vehicle which had the factory-fill oil changed to AMSOIL synthetic gear lube, and despite significantly higher mileage than the first three vehicles, it showed a significantly lower level of wear. The chart and photos below provide visual evidence of the wear materials present in the differentials of each vehicle. The photos clearly show that the heaviest amount of wear occurs early in the break-in period. Wear is significantly reduced when the gear lube is changed to AMSOIL synthetic gear lube following the break-in period.