AMSOIL specializes in developing synthetic lubricants that offer innovative answers to the greatest challenges vehicles and equipment present. The extraordinary performance of AMSOIL synthetic lubricants in a range of markets – automotive, powersports, industrial, racing and more – has made our influence in the industry unmistakable and our brand highly respected. Our commitment to innovation has resulted in legions of brand-loyal customers. 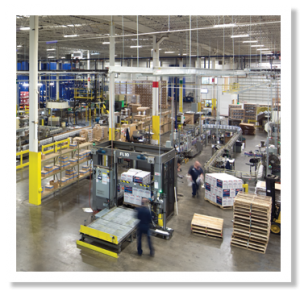 "Dream about something! Go ahead!"

“I DREAMED ABOUT BEING SUCCESSFUL WITH THIS SYNTHETIC OIL.”

Many people think America’s best days for innovation and manufacturing are behind us. That companies are increasing margins instead of increasing quality. Al Amatuzio, the founder of AMSOIL INC., thinks otherwise. For over 40 years, AMSOIL has been formulating, blending, packaging, and serving as a leader in the synthetic lubrication industry. American innovation is indeed alive and well. Watch this video to learn more about Al Amatuzio’ s persistence in building an American company based on American values.

HISTORY - 45 Years In The Making

AMSOIL Founder and Industry pioneer Al Amatuzio built his company AMSOIL on the same principles that defined his career as a jet fighter squadron commander – excellence, integrity and strong leadership. In 1972, the breakthrough came. AMSOIL 10W-40 Synthetic Motor Oil, the result of years of research and inspired by aerospace technology, became the first synthetic motor oil in the world to meet American Petroleum Institute service requirements. It outperformed conventional oils on all counts, signaling a new age in lubrication science. Today, virtually every other motor oil manufacturer has recognized the superiority of synthetic lubricants and followed the AMSOIL lead with introductions of synthetic motor oils of their own. Accept no substitutes – AMSOIL is The First in Synthetics®. HALL OF FAME In 1994 Al Amatuzio was honored as the pioneer of synthetic lubrication with his induction into the Lubricants World Hall of Fame. 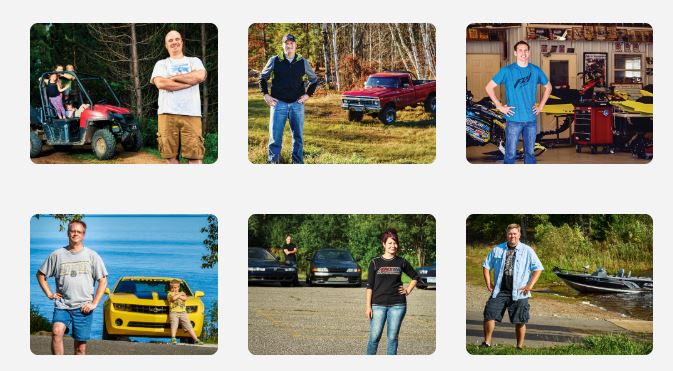 We are not just engineers, chemists and manufacturers, we’re also racers, gearheads and thrill-seekers. Like you, we’re at our best when working on our vehicles, fine-tuning their performance or cruising down the highway.

Our time behind the wheel and under the hood helps us experience firsthand the toll power, speed and performance take on engines. That perspective helps us formulate some of the best synthetic lubricants on the market. Because they not only have to protect your vehicles, they have to protect ours.

Although you might know that synthetics outperform conventional oils, you might not understand why. The difference begins at the molecular level.

Further testing occurs at race tracks around the world. AMSOIL lubricants have helped racing teams operating off-road trucks, stock cars, high-powered boats, dirt bikes and snowmobiles capture countless checkered flags and championships. We believe that Racing is Research™, and we use the data our racing efforts generate to tailor AMSOIL formulations for even greater levels of performance and protection.

Workers found themselved amazed when no other gear lube from the big names would hold up before foaming up then they tried AMSOIL and no problems since bring to them return on investment!
Seeing is believing has brought us a number of new customers!

AMSOIL INC. embodies the American ideals of entrepreneurship, innovation and hard work. AMSOIL Founder Al Amatuzio’s initial idea half a century ago has grown into a company recognized as a world leader in synthetic lubricant technology. Despite the opportunity to save money by manufacturing in other countries, we’re committed to formulating, blending and packaging AMSOIL synthetic lubricants in the United States.

AMSOIL FOR ANY ENGINE

AMSOIL makes top-quality synthetic lubricants for your car, truck, motorcycle, boat, four-wheeler, snowmobile, lawnmower and anything else with an engine. AMSOIL lubricants are designed to help your equipment run at peak efficiency and last longer. Join the millions of proud AMSOIL users to experience the difference.

AMSOIL has a documented history of innovation and leadership.

The AMSOIL corporate headquarters, manufacturing plants and chemical and test laboratories boast state-of-the-art equipment and specialists in every facet of lubricant technology.  At AMSOIL, unparalleled quality standards are assured.  And AMSOIL provides a full range of customer and technical services, while fourteen distribution centers throughout North America and the world keep pace with the increasing demand for AMSOIL products. Just after one visit one can understand the true leadership and vision the executive staff has. In their 31st year, AMSOIL is well positioned to hold the industry lead for the unforeseeable future.

During Lieutenant Colonel Al Amatuzio’s 25 years as an award-winning jet fighter pilot, he gained a solid appreciation for the extraordinary lubricants that protected the engines of the jets he flew. He knew that only these lubricants, synthetic lubricants, could stand up to the demanding operating conditions of jet engines and the severe temperature extremes they encounter. 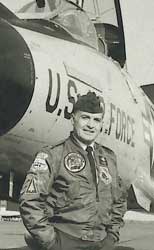 He knew also that the same outstanding performance benefits synthetic lubricants provide for jet engines would prove invaluable to car, truck and other internal combustion engines.

In the mid-1960s, Al Amatuzio began an intense period of research and development. He assembled the industry’s most knowledgeable chemists and directed the formulation of the first synthetic motor oil in the world to meet American Petroleum Institute service requirements.

Today, virtually every other motor oil manufacturer has recognized the superiority of synthetic lubricants and has followed the AMSOIL lead with introductions of synthetic motor oils of their own. They spend millions of dollars advertising their “new” and “revolutionary” products. No one, however, can match AMSOIL experience and technological know-how. And no one delivers products like AMSOIL. Accept no substitutes — AMSOIL is “The First in Synthetics.” ®

Though AMSOIL Inc. was founded in 1972, its story begins in the mid 1960s, when Lt. Col. A.J. “Al” Amatuzio, a jet fighter squadron commander, was impressed by the superb performance of synthetic lubricants in jet engines (in fact, only synthetics stand up to the performance demands of jet engines) and began studying their possible automotive applications. In 1972, after an intense period of research and development, Al Amatuzio introduced the first synthetic motor oil in the world to exceed API automobile service requirements.

The next year, Amatuzio developed a marketing plan to get his innovative but still unknown product to customers. His marketing plan enabled customers to have personal contact with a dealer who could take the time to explain the product and answer questions. The rest is history! From humble beginnings in a northwest Wisconsin warehouse, AMSOIL pioneered an entire industry — synthetic lubrication — and established high professional and ethical standards for a unique business opportunity.

Since 1972, the company has seen rapid growth and constant change. One driving force behind the great success of AMSOIL is a commitment to quality and constant improvement. As the years passed, an increasingly broad range of automotive and industrial lubricants and filtration equipment was developed, with each new product exceeding industry performance specifications by a wide margin. In addition, the ALTRUM division of personal care items and household products was created, and the AGGRAND line of natural, organic lawn and garden products followed. 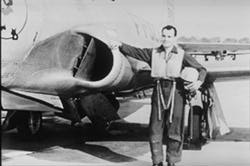 In February 1994, Lubricants World  magazine honored A.J. Amatuzio by inducting him into their “Hall of Fame” as the pioneer in synthetic motor oil.

The original handful of independent AMSOIL Dealers has multiplied into a network of tens of thousands. Through them, AMSOIL synthetic motor oil is distributed throughout the country and the world. 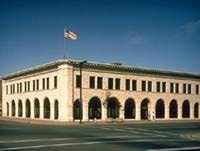 The facilities at the AMSOIL Corporate Headquarters reflect the AMSOIL commitment to excellence. High-speed bottling lines, state-of-the-art information processing equipment and the latest quality control techniques are used to create the highest quality motor oil and aid Dealers in running their businesses. Fourteen strategically located warehouses distribute AMSOIL products to Dealers and ultimately to customers throughout North America and around the world. These customers confirm what we’ve known all along. AMSOIL is “The First in Synthetics.”

Continuous growth in demand has recently caused AMSOIL to increase the output of the manufacturing plant. AMSOIL has reached another milestone with the historic purchase of what will be caller “AMSOIL Center”. This building purchased in September of 2004 contains a total of 374,000 square feet and sits on 55 acres next to the current plant and corporate offices in Superior, Wisconsin. The site allows for more storage for shipments to the dozen distribution centers across the country. 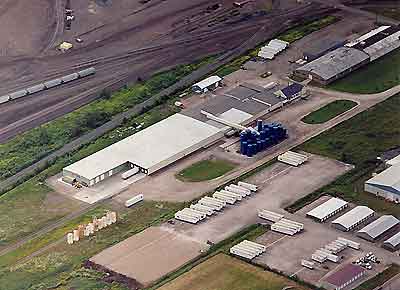 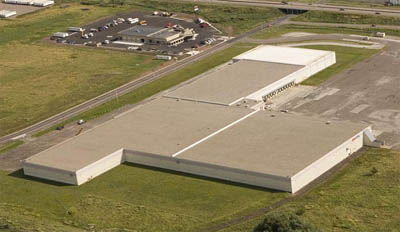 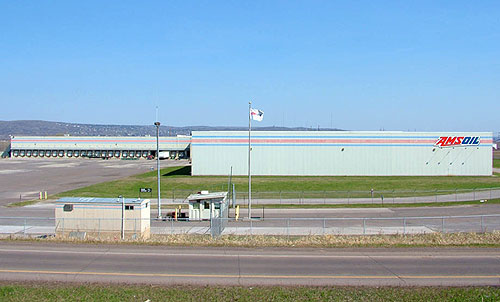 In addition to the new production and storage facility, from AMSOIL rises another measure of success. The expansion of the tank farm. Currently in place are over 1.5 million gallons of storage tanks and two new large capacity blenders. This increases production efficiency including the expansion of the blending tanks indoors and allows AMSOIL to receive more raw materials by rail cars rather than tank trucks. The increased capacity allows the company to remain on target for further double digit growth over the next five years.

A short note from Al Amatuzio – Founder of AMSOIL (May 2005)

The other day I was reviewing the April Action News and the new G-100 product catalog included in it. The products featured in this issue were our two new motorcycle oils. Anyone reading about these outstanding new oils couldn’t help be impressed by how they totally blew the competition away in head-to-head performance tests.

Once again, AMSOIL outperforms the competition and puts test results that prove it right there for everyone to see. It’s also interesting that the very bike manufacturer that said not to use synthetic motor oils in their engines now sells and recommends a synthetic motor oil with their label on it.
They don’t make it, but they profit from it so now it’s OK to use. That’s very similar to how the other oil companies and automakers badmouthed synthetic motor oils until they began marketing their own synthetic oils.
Are their oils as good as AMSOIL? Not when you look at the tests! AMSOIL has a long history of making lubricants that are the very best. And the way we have shown they are the best is by testing them against the competition and publishing the results in our sales literature or right on the product labels.
I don’t know of any other oil company that does this like we do. But then, I don’t know of any other oil company that makes products as good as we do, so they don’t really have as much to toot their horn about as we do
.