Further evidence of stress and increased temperatures during the differential break-in period is documented in a 2005 SAE paper entitled The Effect of Heavy Loads on Light Duty Vehicle Axle Operating Temperature. A light duty GM truck towing 14,000 pounds was driven from Orange County, Calif. to the Nevada state line. The test was conducted with both a new axle and a broken-in axle.

AMSOIL SEVERE GEAR 75W-90 and 75W-140 Synthetic Gear Lubes are formulated for severe service applications, protecting differential gears for extended drain intervals of up to 50,000 miles in severe service and 100,000 miles in normal service, or longer where specified by the vehicle manufacturer. Formulated with shear stable synthetic base stocks and an extra treatment of additives, SEVERE GEART Gear Lubes provide unsurpassed wear protection and friction reduction, while their excellent thermal stability prevents thermal runaway, a phenomenon caused by a lubricant’s inability to control friction and increased heat under high stress conditions.

I deleted this chart as it was several years old (archive story) and prices have changed vastly but please compare AMSOIL to any of the OEM prices and it’s still astonishing.

A test on four separate vehicles further demonstrated the importance of changing the factory-fill gear lube within the first few thousand miles. Oil analysis results revealed most of the wear in vehicle one occurred within the first 6,869 miles. Despite higher mileages, vehicles two and three only showed slightly higher iron wear than vehicle one. Vehicle four was the only vehicle which had the factory-fill oil changed to AMSOIL synthetic gear lube, and despite significantly higher mileage than the first three vehicles, it showed a significantly lower level of wear.

The chart and photos below provide visual evidence of the wear materials present in the differentials of each vehicle. The photos clearly show that the heaviest amount of wear occurs early in the break-in period. Wear is significantly reduced when the gear lube is changed to AMSOIL synthetic gear lube following the break-in period. 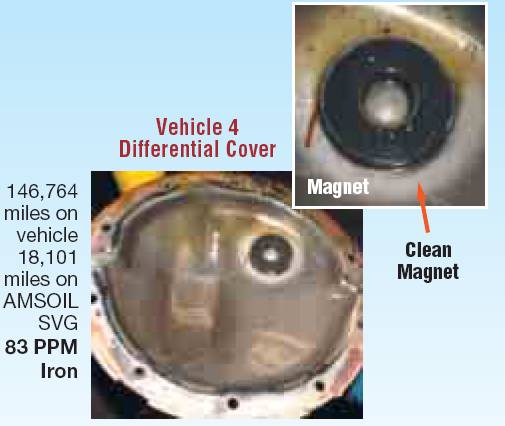