Objective
Compare the performance in laboratory tests and cost-effectiveness of AMSOIL Signature Series Synthetic Motor Oil to several passenger-car/light-truck synthetic motor oils widely considered by marketers and consumers to be the best available.

Note: Test results published in this Technical Study describe and represent properties of oils that were
acquired on the dates listed in Table 1 (page 3). Results do not apply to any subsequent reformulations of such oils or to new oils introduced after completion of testing. All oils were available to consumers at the time of purchase. Testing was completed February 2013 by an independent, third-party lab. Formulations werecoded to eliminate bias, and samples were tested in random order. An appropriate number of trials of each oil were run to produce results at the 95 percent confidence level when compared to Signature Series Synthetic Motor Oil. 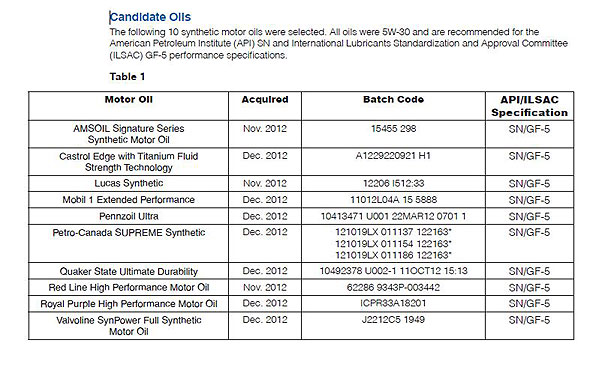 Four-Ball Wear Test (ASTM D 4172 Mod.)
According to the ASTM, the Four-Ball Wear Test “can be used to determine the relative wear preventive properties of lubricating fluids in sliding contact under the prescribed test conditions. No attempt has been made to correlate this test with balls in rolling contact. The user of this test method should determine to his own satisfaction whether results of this test procedure correlate with field performance or other bench test machines.”1

Although not widely used as an engine oil test, the Four-Ball Wear Test provides a means of comparing relative wear-protection properties of lubricating oils. To better differentiate between lubricants, the severity of the test was increased with higher rpm and temperature (the test standard allows for running the test under modified parameters). The size of the scar as a result of the test indicates the level of wear protection the lubricant provides. 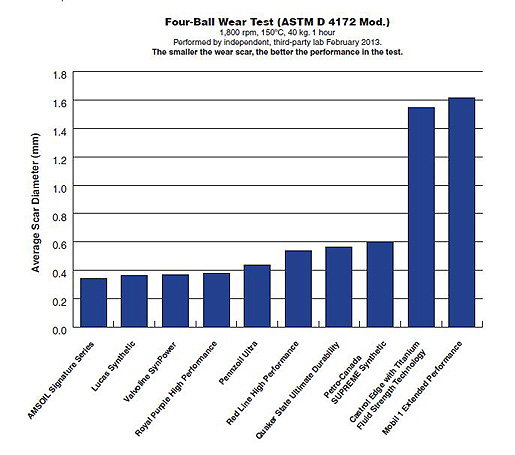 Total Base Number (ASTM D 2896)
Total Base Number (TBN) is the measure of a lubricant’s reserve alkalinity, which aids in the control of acids formed during the combustion process. TBN can also be used as a measure of lubricant degradation in service.1 Motor oils that have a high TBN and demonstrate good TBN retention are known to effectively reduce the corrosive effects of acids over an extended period. 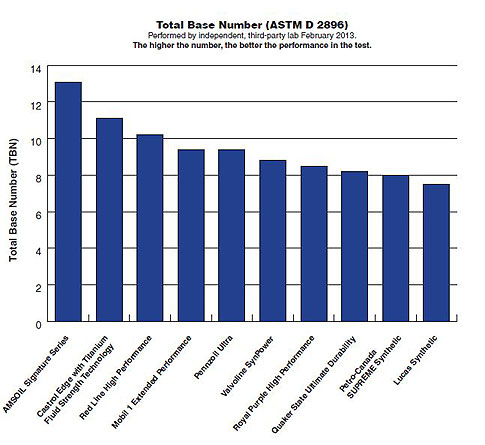 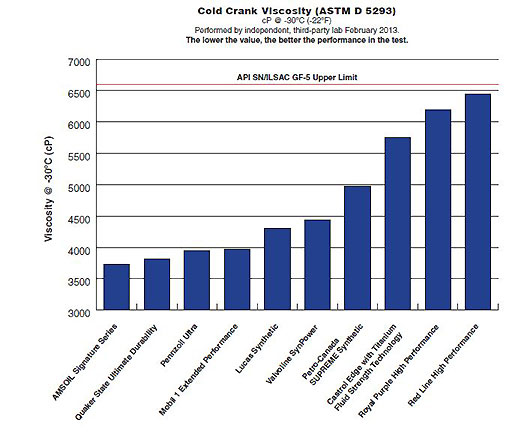 Thermo-Oxidation Engine Oil Simulation Test (TEOST, ASTM D 6335)
Motor oils can form deposits when exposed to increased heat, reducing efficiency and contributing to poor overall performance. According to the ASTM, the TEOST test method “is designed to predict the high temperature deposit forming tendencies of an engine oil. This test method can be used to screen oil samples or as a quality assurance tool.”1 Given the number of vehicles now equipped with direct fuel injection, turbochargers and other performance-enhancing technologies that increase heat, deposit control has taken on increased importance. To meet the API SN Resource Conserving and ILSAC GF-5 motor oil specifications, a 5W-30 motor oil must limit total deposit formation to 30 mg or less. 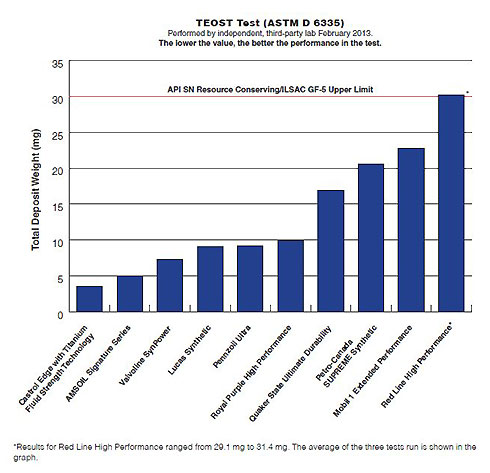 NOACK Volatility Test (ASTM D 5800)
The NOACK Volatility Test determines the evaporation loss of lubricants in high-temperature service. According to the ASTM, “Evaporation may contribute to oil consumption in an engine and can lead to a change in the properties of an oil.”1 As with the TEOST test, low values in the NOACK Volatility Test are of particular benefit in modern, hot-running engines. In the NOACK test, a candidate oil is exposed to heat and circulating air. Following 60 minutes, the remaining oil volume is weighed and compared to the original weight, with the difference reported as the percentage of weight lost. Results must be limited to 15 percent or less to meet the API SN and ILSAC GF-5 specifications. 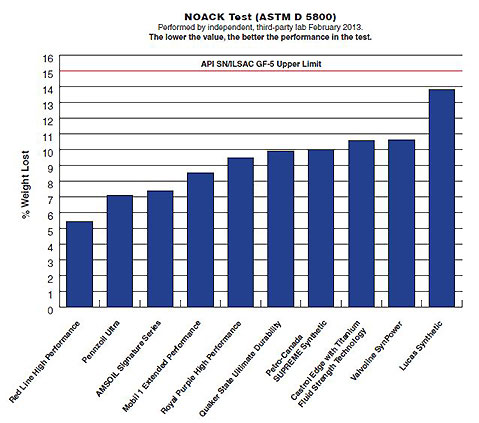 Results
While all oils were below the API SN and ILSAC GF-5 upper limit, results indicate differences in hightemperature volatility. Half of the oils limited the percentage weight lost from volatility to under 10 percent, with AMSOIL Signature Series Synthetic Motor Oil having the third-best result.

Overall Annual Cost
Although AMSOIL Signature Series Synthetic Motor Oil is recommended for 25,000 miles/one year in normal service1, light-duty vehicles accumulate an average of 11,318 miles a year2 and are generally used in driving conditions that fall under the severe service3 category. For those reasons, overall annual cost is evaluated at 11,318 miles under severe service driving conditions. Signature Series Synthetic Motor Oil carries a drain interval of up to 15,000 miles/one year, whichever comes first, in severe service. Because the other nine oils do not carry a recommended drain interval, a drain interval of 4,777 miles was used, which represents the average drain interval of motorists as reported in the 2012 National Oil & Lube News Operator’s Survey. Although Mobil 1 Extended Performance is recommended for 15,000 miles in out-of-warranty vehicles in certain driving conditions, its extended drain recommendation does not apply for this evaluation. According to the official statement on the Mobil 1 Extended Performance label, “Extended service is not recommended in severe service applications involving racing and commercial use, frequent towing or hauling, extremely dusty or dirty
conditions, or excessive idling.” Per-quart prices (Table 2) reflect the MSRP where available or average of a cross-section of retail outlets surveyed January 2013. Costs are based on a five-quart capacity. Overall value represents the cost of the oil only. 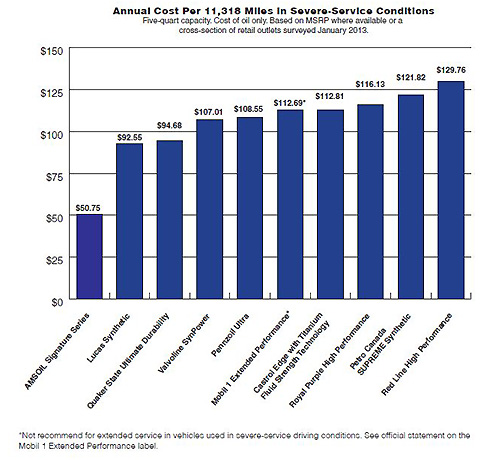 Results
Though the retail price per quart of AMSOIL Signature Series Synthetic Motor Oil is initially higher, it provides lower costs compared to the other oils. Overall, Signature Series is the most cost-effective oil.

Conclusion
AMSOIL Signature Series Synthetic Motor Oil ranked first in four of the six comparisons. In contrast, while some oils performed well in a few areas, they did not perform as well in others. Different results from one test to another indicate an emphasis in one area of performance does not correspond to increased performance in other areas of testing. It also reveals the difficulty inherent in formulating a high-quality motor oil that performs well in tests designed to assess optimum engine protection and life.
As engines continue to evolve and demand more from motor oil, the need for premium lubrication becomes more critical. Industry-standard testing performed by an independent, third-party laboratory reveals AMSOIL Signature Series Synthetic Motor Oil to be the overall top-performing oil in these tests. When considering the savings of time and money available due to its 15,000-mile/one-year drain interval in severe service, Signature Series is also the most economical choice.

This article from Lubes ‘n’ Greases will give you an idea how companies like Mobil (and every other major brand) compromised to lower the base stock quality (dozens of degrees of group IIIs exist) only because Castrol was getting away with it. Market share was more important than best quality:

Too Many Choices? With Six Motor Oil Tiers, Retail Appears Unruly
See page 49 & 50 how Mobil 1 and others (1999) stopped using real synthetic base stocks for petroleum ones due to being granted using the “Synthetic” term as a marketing term only..
By Larry Solomon (May 2013)

While competing motor oils must be changed up to five times over 25,000 miles, AMSOIL Synthetic Motor Oil is only changed once, saving both time and money. 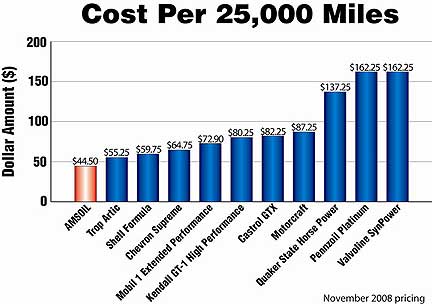 Valvoline guarantees your Engine for up to 300,000 miles if Valvoline is used. Take a look..

Other companies, of course, have been reluctant to follow
our lead into extended drains. Why, from their perspective, should they?
More oil changes means more oil is sold, which means more money is made. It is not rocket science. Only Mobil, with its introduction of Mobil 1 in the mid 1970s, ventured into extended drain interval territory.
But that didn’t last long. Although the oil may have been up to the challenge, I suspect that the bean counters at Mobil were concerned about the bottom line and the company pulled back on its drain interval
recommendation. It was all about money and the corporate mind control in place.

While it is true that Mobil, now ExxonMobil, as well as some others, are finally offering a few extended drain lubricants, the 3,000-mile oil drain mindset still dominates the industry although the average customer has their oil changes 2.6 times per year.

Valvoline, for example, has reinforced that recently with its introduction of its Valvoline Engine Guarantee program. Essentially, this program
guarantees an engine for up to 300,000 miles if Valvoline motor oil is used. Impressive on the surface, but there is a little more to it than that. Valvoline attached some qualifiers. First and foremost, the Valvoline motor oil, along with the oil filter, must be changed every 3,000 miles throughout the duration of the program. Imagine that – most cars have suggested drain intervals of up to 12,000 miles and Valvoline wants to keep you at 3000 miles! Volatility mostly occurs at the start of the life of an oil so a 3000 mile oil change exponentially increases deposits, emissions and reduced exhaust component life.
Qualified vehicles must be registered prior to reaching 75,000 miles, Valvoline motor oil must be used for at least 18 months prior to registration and no vehicles older than 1990 models qualify. Diesel powered vehicles don’t qualify for the program, nor do vehicles used for racing, vehicles over 10,000 pounds or vehicles with modified
engines. That’s understandable.

Valvoline has further qualified the program contingent on the type of oil used. To gain the 300,000-mile coverage consumers must use one of Valvoline’s full synthetic products (for some reason these are not labeled as 100% Synthetic). Using a Valvoline synthetic blend carries the coverage to 225,000 miles and a Valvoline conventional oil carries it to 150,000 miles. (Is that all they think it’s good for? Even at 3000 mile oil changes?)

To be sure, Valvoline has done its homework. Very few, if any, claims will ultimately be paid. On the low end, 150,000 miles is virtually no stretch for today’s engines. On the high end, very few motorists drive the same vehicle for 300,000 miles, and the guarantee is not transferable. There is no question that the profits are there for Valvoline.
Assuming a motorist drives 15,000 miles per year it would take 20 years, driving the same vehicle, to reach 300,000 miles. That’s 20 years at
five oil changes per year. That’s a lot of Valvoline motor oil sold. Well about 550 quarts for an average vehicle. Compare that to just 66 quarts of AMSOIL and improved enjoyment of the vehicle.

Clearly, the push behind the Valvoline program is profit, and a person can’t fault Valvoline for that. We are all in this business to make money. What you can fault Valvoline for, and all others who continue to support
3,000-mile oil change intervals, is their irresponsibility in regard to consumers and the environment.
To be sure, way too much money is being wasted on unnecessary oil changes, and way too much used oil is being generated.

In any case, AMSOIL will continue to do the right thing. We will maintain our effort to provide the absolute best, longest lasting lubricants we possibly can. If that means selling a consumer one oil change per year
as opposed to five, so be it. Your customers appreciate the value, and you can be proud of the service you provide.

This talk of extended drain intervals leads me to one final, related topic. We have had to make changes to suggestions on our diesel oils and how some current diesel applications are affecting our drain interval recommendations. Pay attention to the product data sheets and interval guides. Essentially, our research has identified trends that indicate fuel dilution issues in 2007 and newer on-highway Caterpillar C13 and C15 engines. It is apparent that engine design is the cause of the problem.
Fuel dilution reduces viscosity and may lead to increased wear. Unfortunately, there are no formulation modifications or methods of filtration that can counter these effects. Consequently, rather than jeopardize our reputation or the vehicles of our customers, AMSOIL has
deemed it prudent to adjust our drain interval recommendation in these applications.
Once again, with the consumer in mind, it was the right thing to do.