AMSOIL is all about enthusiasts who work hard and play harder, whether on a sled, dirt bike or in a car. Together we’re fiercely “Devoted to Protection” when it comes to taking care of our vehicles and toys.

Friday, we posted a rundown of the first half of the year at AMSOIL. Let’s take another ride down memory lane to revisit more company news, exciting car shows and racing events that saw our hard-working products put into action. These are the places where we all came together to fuel our passions and share our enthusiasm for all things automotive. Thanks again to Lindsay Premo for helping gather all the info.

In July, we welcomed some special visitors to the AMSOIL Center. The Factory Connection/GEICO Honda Supercross and Motocross team made a trip to our facilities in Superior, Wis., to see where the products they use in their dirt bikes are made. They also participated in a heated (and heavily hyped) tricycle challenge with AMSOIL employees. We also sent our videographer/producer Wyatt Gruben to the hills of Colorado for a backcountry trip with AMSOIL off-road racer Brad Lovell and crew.

The 77th annual Sturgis Motorcycle Rally roared into the sleepy town of Sturgis, S.D., for its annual gathering of motorcycle mania from all corners of the world. AMSOIL was on hand once again as the Official Oil, welcoming riders and conducting oil changes to ensure the bikes were ready for the miles ahead. Hot August Nights kicked off in Reno-Sparks, Nev., taking over the entire region with thousands of spectators and show-stopping display vehicles. As the Official Oil, AMSOIL was on hand with three booth locations and proudly sponsored the Autocross Drifting event. Gordon Tronson was also on hand in the main AMSOIL booth with his famed hot rod that drew a crowd the entire week. An extension of the Cruisin’ Ocean City event in May, the October Endless Summer Cruisin’ event felt like one last hurrah for summer, and it was. AMSOIL was on hand once again as Official Oil, and the crowds turned out for what is often their last car show of the year.

The world-class SEMA Show churned out another year of automotive industry togetherness and show-stopping booth displays. The AMSOIL team was there promoting our latest and greatest product launches and turning heads all week. Hauk Designs displayed its Tomahauk build in the AMSOIL booth, while AMSOIL products were in countless other booth and feature vehicles throughout the show floor. At a show of this magnitude, car builders only want the best products in their vehicles. When it comes to lubrication, that’s us. AMSOIL Signature Series Synthetic Motor Oil was already known as the best oil money can buy, but in 2017 it underwent a reformulation to meet new and upcoming engine oil specs to combat low-speed pre-ignition (LSPI) common to modern engines. AMSOIL was once again ahead of the curve in meeting those challenges, delivering 100% protection against LSPI in the engine test required by the GM Dexos1® Gen 2® specification. Learn about the effects of LSPI and the testing done on AMSOIL products here.

In racing news, Snocross racing kicked off again with the previously mentioned Pro Class rule change taking effect. Two races into the season we have seen the rise of privateers, yet not the fall of old standbys like Tucker Hibbert and Scheuring Speed Sports’ Lincoln Lemieux and Tim Tremblay. And there you have it. 2017 brought many changes, challenges and triumphs to AMSOIL and we look forward to what’s in store for 2018. Thanks for following along and we hope you stick around to see what the next year brings. From all of us at AMSOIL, have a safe and happy new year. 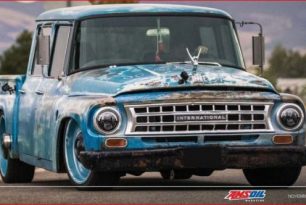